The first version of Roomba to hit the market was more popular than we developers had dared hope. An initial factory-order for 15,000 turned quickly into an order for 25,000 followed by orders for many, many more.

The company decided to fill in the product line so we developed several new models with feature designed to appeal to different market segments. Three of the new robots had gray bumpers, the fourth was all red including the bumper.

When early production units arrived from the factory we checked to see that they worked properly. The robots with gray bumpers passed every test but the red robot was a different story. It began strong—cleaning well, turning away from cliffs, and escaping from collisions. When cleaning was done the robot detected the charging station beacon from the proper distance, turned toward it, and advanced confidently. But then, only a couple of feet from its goal, the robot became confused, hesitated, and wandered off in the wrong direction. Every attempt ended the same way, no matter where or how we started it the robot could never reach its source of electrical nourishment.

We were all baffled. The red robot had exactly the same homing electronics as the other robots; it ran exactly the same code; the beacon sent exactly the same signal to all the robots. The only difference we knew of was the color of the bumper. How could that possibly affect the way the robot behaved?

The sensor Roomba uses to detect the beacon is mounted on the bumper. Above the sensor is a little plastic dome that directs IR energy toward the detector. As the robot turns left or right the dome moves into different parts of the beam and the signal changes. For the robot to operate correctly the IR energy reaching the detector must come from nowhere but the plastic dome.

The red bumper mystery was a fun if perplexing debugging exercise. But I think it teaches a lesson in a completely different area: Be wary of drawing conclusions from simulations. A simulation includes only those features one believes in advance to be significant. But the real world always seems to find ways to make obscure things suddenly take on vital importance. At least it does in relatively unexplored areas like robotics. 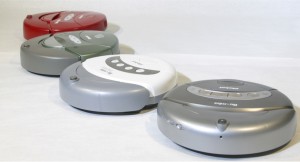 The culprit is on the left.